"Yuck!" said Dewi Limaran and then she threw it away into a river.

She did not know that the snail was actually an old and powerful witch. She could transform herself into anything. The witch was angry to Dewi Limaran. The witch put a spell on her and changed her into a golden snail. The witch then threw it away into the river.

The golden snail was drifting away in the river and got caught into a net. An old woman was fishing and used her net to catch some fish. She was surprised to see a golden snail in her net. She took it and brought it home. When the old woman woke up in the morning, she was surprised that the house was in the good condition.
The floor was mopped. And she also had food on the table. She was thinking very hard. 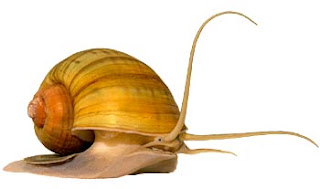 "Who did this to me? The person is very kind." It happened again and again every morning.

The old woman was very curious. One night she decided to stay up late. She was peeping from her room to know who cooked for her. Then, she could not believe what she saw. The golden snail she caught in the river turned into a beautiful woman. The old woman approached her.

"I am Dewi Limaran, Ma'am. A witch cursed me. I can change back as a human only at night," explained Dewi Limaran.

"The spell can be broken if I hear the melody from the holy gamelan," continued Dewi Limaran.

The old woman then rushed to the palace. She talked to Prince Raden Putra about her wife.

Prince Raden Putra was so happy. He had been looking for his wife everywhere.

He then prayed and meditated. He asked the gods to give him the holy gamelan. He wanted to break the witch's spell. After several days praying and meditating, finally gods granted his wish. He immediately brought the holy gamelan to the old woman's house. He played it beautifully. And then amazingly the golden snail turned into the beautiful Dewi Limaran.

The couple was so happy that they could be together again. They also thanked the old woman for her kindness. As a return, they asked her to stay in the palace.
Kembali ke Kumpulan Dongeng Bahasa Inggris Pilihan