Mungkin dengan berbagai contoh recount text ini, sobat bisa lebih mengerti apa dan bagaimana cara terbaik menulis recount text. Meski pada dasarnya recount text ini bisa dibilang paling mudah dari berbagai jenis text lainnya, namun dengan terbatasnya "kemampuan" bahasa Inggris plus kurangnya bahan belajar terkadang kita jadi sering "lupa" bagaimana membuat recount text.
Oke, langsung saja ini dia contoh recount text yang "mungkin" berbeda dengan situs / blog lainnya :
Contoh Recount Text  Pendek(1)
BEING LATE
ditulis oleh Era Meiswarawati
Last morning, Dinar, my roommate woke up late and she had to go to campus.
When she wanted to take her motorcycle, in fact she couldn’t move it because there were some motorcycles that blocked up her motorcycle.
She tried to move all of the motorcycles, so that her motorcycle could move from the garage. But she couldn’t do it.
Then, she called Adel who had that motorcycle which blocked it up. After that, her friend who had that motorcycle helped her. Finally, she could move her motorcycle and rode it to go to campus. 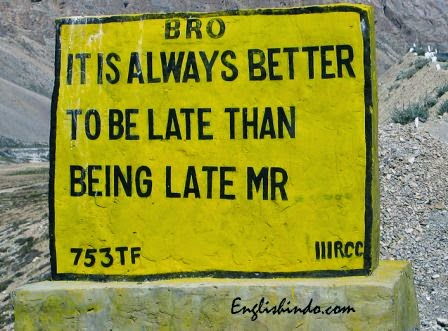 Holiday in Pasir Kencana Beach
ditulis oleh Muhammad Fadhil Immas
Last week my friend and I were bored after three weeks of holidays, so we rode our bikes to Pasir Kencana Beach, which is only five kilometres from where I live. When we arrived at the beach, we were surprised to see there was hardly anyone there.

After having a quick dip in the ocean, which was really cold, we realized one reason there were not many people there. It was also quite windy. After we bought some hot chips at the takeaway store nearby, we rode our bikes down the beach for a while, on the hard, damp part of the sand. We had the wind behind us and, before we knew it, we were many miles down the beach.

Before we made the long trip back, we decided to paddle our feet in the water for a while, and then sit down for a rest. While we were sitting on the beach, just chatting, it suddenly dawned on us that all the way back, we would be riding into the strong wind.

When we finally made it back home, we were both totally exhausted! But we learned some good lessons that day.
Contoh Recount Text Pendek (3)
Holiday in Semirang Waterfall
ditulis oleh Windhariyati Dyah K

On Sunday, I and my best friend, Sari, visited Semirang Waterfall in Ungaran. It was the first time for me to visit the waterfall.

When we arrived at the hill, I felt so fresh and I could enjoy the scene. The air was so pure and all I could see only green and green.

In Ungaran, we took a little bit trekking to find Semirang Waterfall. It was too bad for me because the distance to see the waterfall was too far.

After taking so far distance, we found Semirang Waterfall. What a beautiful waterfall. We enjoyed the nice water in the rain forest surrounding the waterfall.

Hearing the sound of falling water made me peace and relax. It was also excellent drowning out background sound. Playing with the water made me feel so happy.

Finally, the time was over. It was time for us to go home. It was an unforgettable moment. I really enjoyed it.

MY VERY BUSY DAY
Ditulis oleh Eviana Yuni Afra
Last Monday was a busy day for me. I spent my time to do a lot of activities from college to my home.
First, at the morning, I did my presentation's assignment with my partner, she was Nurhidayah. It took 3 hours. And then we went to the campus for joining lecture. But, the lecturer said that our presentation would be started next week. It made us disappointed. The class was finished at 12.30.
After that, I had to go home because my grandmother was in a bad condition. She was hospitalized. So, it was a must for me to back home at that time. When I got there, there were so many members of my family. There were about 10 people. My aunt, my niece, my uncle and some of my cousins. We all hoped that our grandmother would get better soon.
Those activities made my day busy.


Contoh Recount Text Pendek (5)
MY VACATION WITH MY BELOVED PERSONS
Ditulis oleh Ilima Fitri Azmi
One day, my sister said to me that she really wanted to go to the beach. So I promised her that the next day we would go to Maron beach in Semarang.
The next day, we prepared many things in the morning. We brought some foods and beverages, such as fried rice, chocolate wafers, potato chips, water and orange juice. Before going to the beach, I ask my boyfriend, Kiki, to join us going to the beach. He agreed to join and he came to my house. After that, we went to the beach. We went there by motorbike. It took 25 minutes to arrive there. Then, we bought tickets in the entrance gate. Before swimming, we changed our clothes first. We swam there for more than one hour. We felt so tired that we decided to eat the foods that we had brought. Next, my boyfriend and I created a very big sand castle, while my sister continued swimming. After that, we decided to go home because it was getting dark.
On the way home, we still felt hungry. So we stopped at a Javanese restaurant to eat something. I ordered gudeg, while my boyfriend and my sister ordered rames rice. After finished eating, we paid our bills. Then, we went home. We arrived at home at 6 o’clock and we were absolutely exhausted.

That was a very exhausting day, but I felt so happy that I could have a vacation with my sister and my boyfriend.


Contoh Recount Text Pendek (6)
THE FLOOD
Ditulis oleh Afifah Tri Hyuanawati
One Christmas in 2007, I was joining a final test try out at school. It was held from 8 a.m. to 2 p.m. One of my schoolmates, Rini, asked me for accompanying her to the bus stop. When we arrived there, suddenly the heavy rain fell down from the sky. Rini suggested me to go home soon while she was entering the bus.

It was still raining when I was home. The rain did not stop and became bigger when the night had come. People were standing in front of their house, hoping that the flood would not come. In the middle of the night, I got news that South Purwodadi had been drowned.

The next day, Purwodadi had become a flood area. All activities were paralyzed. No one went for work or school because the land had been covered by flood. However, I thank God for not allowing the flood entered my house. Even my house had been changed into an emergency kitchen. It was so crowded there. I and my father took a walk around the center market and Central Purwodadi. All that we could see was water and water. At night, the flood looked like a beautiful ocean with the moonlight on it. I felt as if I was one of the passengers of Titanic who was sailing on the sea.

Finally, the flood was starting to decrease in the next morning. I and my family cleaned our front yard together. That was the greatest flood that I had ever experienced in my hometown.

Contoh Recount Text Pendek (7)
MY BUSY HOLIDAY
Ditulis oleh Rise Aditya Anggraeni
On April 16th, 2010, I thought this would be a great holiday for me because that was the holy day for Hindhu people . I was so tired about the study, so I guessed this time I could get full refresh anyway. However, the fact said the other way.
First like an ordinary daughter, I had to get up early morning helping my mother, of course after I prayed. Then I did my chores, cleaned up my room, and spread out my bed under the sun ray. I was really in danger if my mom knew that my room was messy. So, I made it as soon as possible. Second, my aunts called me in the afternoon. I did not meet them for a long time, that was the way I kept for hours to talk with them. After that, unpredictable my neighbor visited me. She asked my help finishing her homework. At last, the time was running and I just remembered that I had a lot of homework. I got mad, confused and regretful why I did not check my homework before. Therefore, I did my homework until 2:00 a.m. the next morning.

I did not feel this was holiday instead of I had to work hard and got a long ship with my homework.