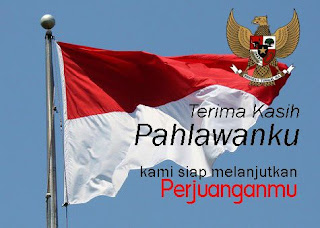 The future President Sukarno declared independence on 17 August 1945, and on 19 September, Dutch internees, with Japanese support, occupied the Oranje Hotel in Surabaya, and hoisted the Dutch flag. While this was taking place, young Indonesians were busily replacing Japanese flags in all the offices with Indonesian ones.
When they heard what the Dutch had done, the Indonesians rushed to the hotel, and hand to hand fighting began with the Dutch, who were determined to defend their flag. Very soon shots were heard, and several people fell - both Dutch and Indonesian - as several Indonesian youths climed the flagpole and ripped the blue stripe off the Dutch flag.
By the beginning of October, fierce fighting had broken out between the Indonesians and the Japanese, who refused to hand over their arms. The Indonesians managed to take possession of numerous buildings throughout Surabaya, and commandeered hundreds of cars and trucks to facilitate their movement throughout the town.
Then, on 25 October, some 6,000 British troops of the 49th Brigade of the 23rd Division under the command of Brigadier Mallaby, entered Surabaya. They had been ordered to organise the recovery of Allied prisoners-of-war, and the Indonesians were happy to co-operate. However, the British also sought to recapture Surabaya for the Dutch, and occupied key buildings and railway stations, and dropped leaflets over the town informing the populace that anyone seen bearing arms would be shot.
The British had underestimated the extent of Indonesian resistance, and indeed the numbers involved. They found themselves up against a force of 20,000 troops of the newly-formed People's Security Army (Tentara Keamanan Rakyat), and over 100,000 irregular fighters, all dedicated to the cause of Indonesian independence. Fierce fighting broke out on 28 October, and soon the Indonesians had surrounded the eight British command posts scattered throughout the city.
Faced with certain defeat, the British asked Jakarta to intervene, and the following day General Hawthorne, President Sukarno, and VP Hatta flew in to negotiate a truce. A truce was reached on 30 October, and the party from Jakarta left. An evacuation of the British to the harbour was arranged, but in the excitement and confusion, fighting erupted during which Brigadier Mallaby was killed.
The British then decided to take Surabaya by force, and secretly landed 24,000 troops of the 5th Division, along with 24 Sherman tanks and the same number of armed aircraft, backed by a number of warships.
On 9 November, the British gave the Indonesians an ultimatum, ordering their leaders to surrender. When they refused, bombs were dropped on Surabaya on 10 November, heralding a battle that was to last three weeks, at the end of which 200,000 of the town's population had fled, mainly old people, women and children. Over 16,000 Indonesian troops had been killed, and 2,000 British lives lost.
Although the Indonesian resistance had been defeated, the Battle of Surabaya represented an important strategic victory for the Indonesians. It was also an important turning point for the Dutch, who until then had believed that the resistance had no popular support. The Battle of Surabaya shocked them into realising that they were no longer a colonial power.